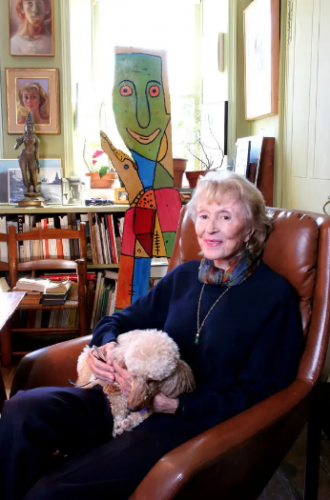 Every death erases a uniqueness. But to say that there was no one on earth like Francine du Plessix Gray is to state a simple and obvious truth. There were three cultural—call them national—streams in her existence: French by birth and background, she was American in upbringing and in principles, and yet also deeply Russian in personal mythology and values and warmth. (Her Russian mother, Tatiana Yakovleva, was the great love of the poet Mayakovsky’s life, and Francine, by a rumor that both exasperated and entertained her, was acclaimed on her visits to Russia as his illegitimate daughter.) Francine, who died on Sunday, at the age of eighty-eight, was raised in what used to be called high or café society—Tatiana, whom she once profiled warmly but warily in this magazine, became, after a hair-raising escape from France during the war, a leading hat maker and style setter at Saks Fifth Avenue; her stepfather, Alexander Liberman, was for many decades the editorial director of all Condé Nast magazines. Francine was thin, tall, beautiful, stylish, and naturally elegant. (Someone who adored her recalls her welcoming visitors to a showing of paintings by her husband, Cleve Gray, dressed all in white, a cashmere sweater perfectly thrown around her shoulders.) She could easily have settled for a life as a model—astonishingly photogenic, she was photographed many times by Irving Penn—or simply as a society beauty, a New York “philanthropist.” But she chose, with an energy and a purpose not made less admirable by the taut stylishness with which she accomplished it, to become what she admired: a novelist, a working reporter, a biographer, a leading feminist, a woman of letters, an honest and unsparing and tender memoirist. She became Francine du Plessix Gray.

Everyone who was blessed to have her in their life could see how the three currents of her background might pour into her at any moment. Her ferocious energies were very much like those of a Russian intellectual of the Tolstoy or Chekhov kind: nervous, intense, single-mindedly dedicated to the pursuit of art. Indeed, her idea of bedside reading was Nabokov’s translation of “Eugene Onegin” and her concept of a fun evening at home with friends was to watch, for the hundredth time, the Russian movie version of “War and Peace.” But the Russian in her loved fun, too, a word she often used. Her voice, fluting and vibrant and excitable, could purr with shared mischief, high on a kind of innocent exclamatory delight in the world. Once, at a spa in Uriage-les-Bains, near Grenoble, she urged an entire pool full of slackers into doing ballet positions as exercise, and then, feeling that this lacked sufficient joie de vivre,cried out, “Let’s all sing Chuck Berry songs!” And she did. The intense Russian and democratic American sides of her nature were nicely accented by her inherited French hauteur, which included a certain amount of French contempt for all Europeans not born French. (“Oh, these Belgian dolts,” she once remarked on a trip to Bruges, taken with Cleve especially to see a single early Netherlandish picture, when she couldn’t get the right directions to the right train platform, and then, shrugging, declared, “We must descend into the bowels of this station.”)

But the strongest of all these threads was the American one. Educated at Spence and then at Barnard, she absorbed and loved American manners and a certain kind of virtuous American purpose, the American place where religious militancy once met liberal innocence. She embodied the best side of the liberal tradition that insisted that privilege was only a preparation for purpose. In the sixties, she participated, passionately, in the civil-rights and anti-Vietnam War movements. (The “Threnody” installation that Cleve painted at suny Purchase was a visual eulogy for the dead of that horrible war.) Like so many passionately activated people of her generation, she believed in American values with a seriousness that touched the edge of purism. This cohort was so resolutely anti-war because they thought Vietnam disgraced what had been accomplished by war: the liberation of Europe and the defeat of the Nazis. She profiled and admired the Berrigan brothers—the “radical priests” of Paul Simon’s “Me and Julio Down by the Schoolyard”—and chose to get arrested once in a march on Washington.

Her life, spent mostly in rural Connecticut with Cleve, was for many years almost cloistered, so devoted were they to their art, their children—Thaddeus and Luke—and, occasionally, their dog. For Francine, born as she was in another world, wanted above all to be taken seriously as an intellectual and an artist—an ambition accomplished so many times over that it was absurd to imagine anything else—but, more difficult, she wanted to take herself seriously as an intellectual and an artist. And so, since she gave herself a forever-rising standard, her ambition brought something earnest and perpetually excited to her engagement with life and with literature. She had less of the practiced cynicism or careerism of the academic vocation that hampers so many other writers in America.

In the end, her warmth was the strongest emotion she possessed. Amazingly affectionate in the pursuit of friendship, she ended every phone call or inscription with some French endearment that felt like a benediction. Yet, like all good writers, she resided in a childhood trauma that she returned to again and again—in her case, the loss of her father, the aristocratic Bertrand Jouchaud du Plessix, in the war, and her mother’s strange decision to long delay telling Francine of his death. This assisted, she often said, her sense of not belonging even as she belonged. It was one of the countless virtues of her best book, the magically realized “Them,” that she could retrospect both that loneliness and still-felt betrayal and also recognize the courage that her stepfather had to show to get his family out of Europe.

Her body of work, including writing for this magazine and outside of it, will be the subject of many a Ph.D. thesis to come—the enlivened and worldly novels, particularly “October Blood”; her reporting on subjects as varied as the state of Hawaii and the state of Soviet woman; above all, her self-reflective essays and her novels and biographies about eighteenth-century women, including Marie Antoinette and Madame de Staël. She once wrote that her goal in writing was “To be something other than what I am.” Recognizing both the aristocratic hatred of shoddy self-praise that launched that phrase—and the relentless and American effort at self-realization and self-transformation that supported its flight—one can only smile, with a certain French irony, at her choice of it. For she remained, of all people on earth, always the most singularly who she was.

Click to read New Yorker Profile
Back To Top