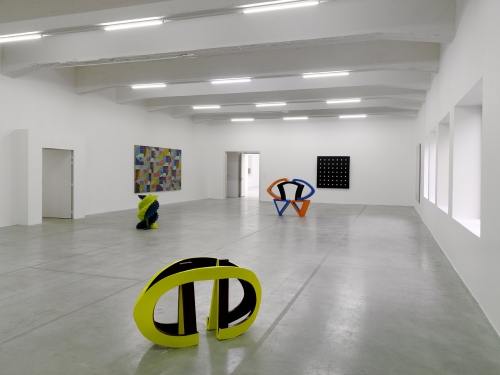 Pattern, Crime & Decoration features the groundbreaking, artist-led American art movement Pattern & Decoration, which started in the mid-1970s and lasted until the mid-1980s. Often viewed as the last organized art movement of the 20th century, it chronologically straddles the end of modernism and the beginning of postmodernism, through its rejection of the rigid tenets of formalism and its embrace of decorative motifs and non-Western visual forms. Strongly grounded in feminism, it included many women artists and sought to highlight some kinds of arts and crafts often dismissed as belonging to the domestic or decorative sphere such as tapestry, quilting, wallpaper or embroidery.

Against the purist, prescriptive background of the dominant art forms of their time such as Minimalism and Conceptualism, Pattern & Decoration signaled the end of the reductivist arc of formalist modernism and the beginning of a new era, by freely and subversively borrowing from the formal vocabulary of Islamic art, Mexican and Indian cultures, or Roman and Byzantine mosaics, diverting the rigidity of the minimalist grid to create repeated patterns that boldly emphasized figurative tropes, bright colors, flowering outlines and arabesques. The movement, gathered around the writings of art critic Amy Goldin (1926-1978), was supported by art dealers Holly Solomon in New York and Bruno Bischofberger in Switzerland. Although Pattern & Decoration was critically and commercially successful at its inception, it faded from view after the 1980s.

In retrospect, it can now be viewed as a forerunner for many art currents that followed, with its use of deconstructed, loose shapes, interest in non-Western art, dazzling colors and mixed patterns used to reject the patriarchal, Eurocentric framework of modernism as embodied in Adolf Loos’s 1910 essay Ornament and Crime.

In this exhibition at the Consortium Museum, artists from the Pattern & Decorationmovement are presented alongside forerunners like George Sugarman (1912-1999), an artist best-known for his colorful sculptures that at the time of their making escaped all categorization, “neither Pop nor Minimal” but were rather “maximalists” and which, in their refusal to conform to a prevailing type of art in the 1960s and 1970s anticipated the state of mind at the root of the Pattern & Decoration movement; as well as American and European artists from the same era whose work shares similar formal concerns, such as Lynda Benglis, Alan Shields, Marc Camille Chaimowicz, Claude Viallat or Simon Hantaï.

Artworks by Valerie Jaudon (b. 1945), Tony Robbin (b. 1943), Joyce Kozloff (b. 1942), Simon Hantaï (1922-2008), Joe Zucker (b. 1941), Mario Yrisarry (b. 1933), George Woodman (1932-2017) and Richard Kalina (b. 1946) examine the function of patterns in their repetition, deviations and repartition on a grid, which builds on the same formal organization principles as Minimalism but depart from the latter’s austere theoretical severity by following the influence of Non-Western arts and most specifically textile arts.

Pieces by Miriam Schapiro (1923-2015), Cynthia Carlson (b. 1942), Tina Girouard (b. 1946), Alan Shields (1944-2005), Robert Zakanitch (b. 1935), Claude Viallat (b. 1936) and Alvin D. Loving (1935-2005) share a common ground when recalling or being obviously inspired by quilting techniques––a traditional kind of vernacular, feminine craft—or by embroidery and sewing, and challenge formal considerations associated with modernism such as the flatness of painting by producing hybrid creations: cut-out backgrounds, fabrics hanging from the ceiling, and visual disruptions by juxtaposing various patterns.

Other works display exuberant colors and formal compositions, whose exploration of decorative motifs recalls the importance of Henri Matisse and most specifically his famed paper cutouts, with Robert Kushner (b. 1949), Kim MacConnel (b. 1946), Betty Woodman (b. 1930), Brad Davis (b. 1942) and Marc Camille Chaimowicz (b. 1947) whose more recent work reactivates the legacy of Pattern & Decoration within the exhibition.

Other artworks are marked by opulence, baroque, glitter, and immersive spaces with Rodney Ripps (b. 1950), Ned Smyth (b. 1948), Thomas Lanigan-Schmidt (b. 1948), Lynda Benglis (b. 1941) and Jennifer Cecere (b. 1950), with lush installations and pieces displaying colorful, ethereal fabrics and objects based on elements such as dollies and fans covered with ornamental motifs and patterns in saturated colors.

The exhibition will be accompanied by a comprehensive catalog with previously unpublished archival material.

View More
Back To Top